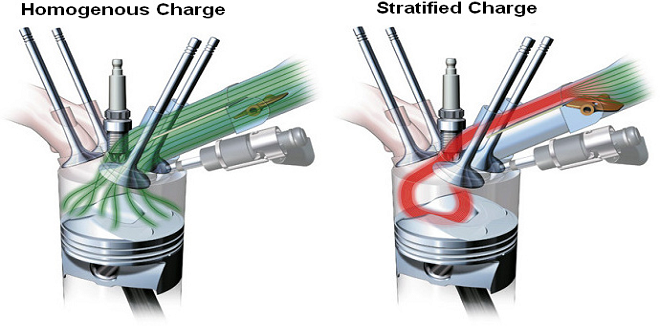 Internal mixture formation by direct fuel injection is, at present, no longer only a feature of diesel engines, being increasingly used in gasoline engines as well. Direct injection in SI engines has a remarkable potential in terms of low fuel consumption and low pollutant emission, but also with respect to the specific cycle work and the power-to-volume ratio when combined with super- or turbocharging.

Tightly focused internal mixture formation can be used to avoid completely throttling of the fresh air mass entering the cylinders. Another advantage is the displacement of the knock limit to higher values, allowing an increase in compression ratio.

Furthermore, direct fuel injection at high velocity into the compressed air just before combustion generates local turbulence centers, which intensify the combustion process. Considering the same air mass captured within the cylinder as in the case of intake duct injection and, therefore, the same fuel mass , the generally observed 8–10 % increase in maximum torque when changing from intake duct injection to direct injection is clearly explainable by the increase in turbulence during combustion. Faster combustion tends to an isochoric process, improving the specific cycle work and, thus, bsfc.

The impact of fuel droplets that are still liquid on the piston surface causes incomplete combustion and, thus, hydrocarbon (HC) emission. The spray-guided method seems to be similar to direct fuel injection in diesel engines. However, there are several fundamental differences: the pressure difference between direct injection systems for diesel and gasoline is approximately 2000:200; therefore, there is better vaporization of diesel fuel droplets, injected through injectors with much smaller holes. On the other hand, the air temperature during compression and injection is approximately 200C higher in diesel engines, whereas the piston surface temperature is at least 100C higher.

However, this method has limitations in high load engines, because of the relatively high fuel mass to be injected in a very short time, which is impeded by the low injection pressure.

The direct injection of liquid fuel into SI engines occurs at a pressure that is orders of magnitude higher than the emulsion injection. The high pressure of the fuel can be maintained at the maximum level or formed as a wave with well-defined amplitude and duration. In both concepts, which form the basis for a multitude of injection system variations, the generated pressure (if constant at a maximum value or as a pressure wave) remains independent of the engine speed. The direct injection of liquid fuel at constant maximum pressure (common rail) in SI engines is based on the fuel boost at 10–30 MPa using a mechanical pump with one or more plungers.

The described system configuration corresponds to those for low pressure injection in intake ducts. Using piezoelectric control of the injector, the inertia of the injector needle lift during opening is extremely small. This allows the injection mass to be split into many portions, thus modulating the injection rate, which is beneficial for mixture formation at different combinations of load and speed. Piezoelectric or electromagnetic control of the injector imposed in the case of common rail systems, and of emulsion injection systems because of the constant pressure level, could cause location problems in advanced, very compact engine heads.

The direct injection of liquid fuel with high pressure modulation (pressure pulse) is based on the hydrodynamic generation of a pressure wave with well-controlled amplitude and duration within the fuel column in a pipe. The load-dependent fuel dosage is obtained by varying the amplitude of the wave at unchanged wave duration. A basic characteristic of this concept is the actuation of the injector needle by the pressure wave itself.