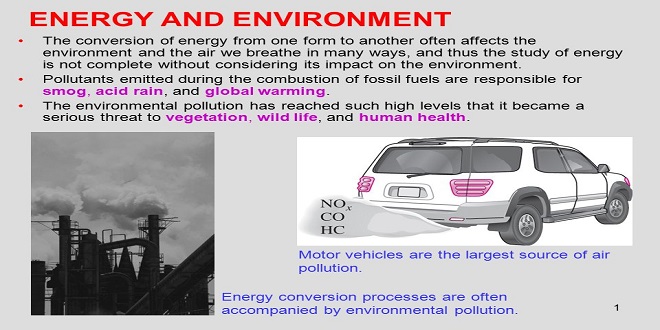 Environmental impact has become a primary criterion for the assessment of energy sources for transport in recent decades. Since industrialization began, the earth’s atmosphere has warmed nearly 1C. In the same period, the concentration of carbon dioxide in the atmosphere increased from 280 to 385 parts per million (ppm).

However, the contribution of carbon dioxide to global warming is very controversial. Climate researchers from the Intergovernmental Panel for Climate Change (IPCC) believe the increasing concentration of anthropogenic substances in the atmosphere is responsible for global warming, at least in the last 5–6 decades. Other researchers believe it is the changed intensity of solar radiation and doubt the greenhouse effect theory.

The predicted warming of the earth’s atmosphere with an increase of 5.8 C until the end of this century at the current CO2 emission obliges consequent measures. Therefore, the stated intent to maintain the temperature increase at less than 2C until 2050 means that a drastic reduction of CO2 emissions is crucial. Earth’s climate is regulated by complex inter-related mechanisms involving the biosphere, oceans, and cry sphere. However, the primary influence on earth’s temperature can be calculated, despite the complexity of the whole process, from a basic balance: the middle temperature (15 C) of the atmosphere is determined by tracer gases, consisting of molecules with two asymmetrical atoms and molecules with three or more atoms.

The availability of energy resources and their environmental impact are important; however, they are not the only considerations in the choice of onboard fuel or energy. The accumulation or conversion of the energy also determines the application. Numerous criteria exist in the realistic valuation of tanks, accumulators, and conversion systems, such as mass volume, safety, materials, and infrastructure for distribution.

Therefore, both the mass and the volume of the full tank for LPG are twice that required for diesel fuel to obtain the same energy content. Methanol has a similar density to that of diesel fuel and can also be stored under atmospheric conditions, which is a net technical benefit. The heating value (kilojoules/kilogram) of methanol is less than half of that for diesel fuel, which means more than double the stored quantity is necessary to achieve the same energy and the same range.

An extreme example is the use of electric energy in a battery: for the same energy content as 37 l diesel fuel, an advanced and expensive lithium-ion battery would be the weight and dimension of an entire compact car.

Compressed natural gas (CNG) is stored at a higher pressure (20 MPa) at ambient temperature, but the density is no higher than 0.141 kg/l. Thus, the tank is not only heavy but also large, as shown in Fig. 1.17. Cryogenic storage has the advantage of a higher density; however, the tank design would be more complex. Hydrogen has a comparatively lower mass than diesel fuel at the same energy content, but the density is the lowest of all fuels: 0.009 kg/l at 200 C and 0.1 MPa. The liquid form has a density of 0.071 kg/l, which is one-tenth that of gasoline; however, it requires a storage temperature of 253 C, with obvious technical complexities.

On-board energy storage will have a very important role in the future of alternative fuels for automobiles.

The structure and design of cars, and consequently the driving dynamics will be newly defined when using batteries or hydrogen tanks. On the other hand, the integration of such energy accumulators within active and passive safety systems seems much more complex than the integration of conventional fuel tanks.