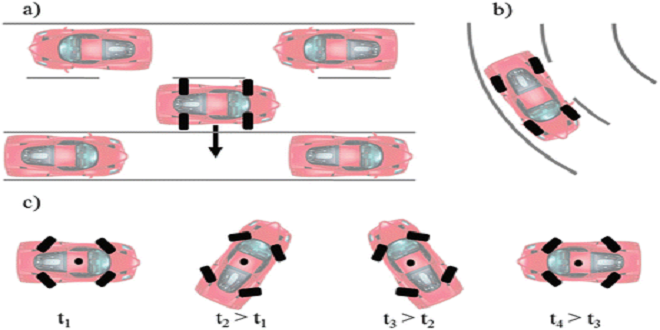 The consequent polarization of mobility leads to dangerous increases not only in traffic density but also in the local concentration of exhaust gases from internal combustion engines—carbon dioxide, pollutants, particulates—as well as noise pollution. As such, transport in silent and compact electric vehicles that do not produce emissions would be ideal.

Moreover, wheel-integrated motors were first successfully applied in a prototype by Ferdinand Porsche in 1899 and are now being developed in actual projects; they could revolutionize driving dynamics and kinematics, with enormous benefits for city-based traffic. If each wheel operates as an intelligent android with a large degree of freedom, new movement forms become possible for the automobile. Lateral parking, cornering with adaptive four-wheel steering, and turning on its own axis.

These scenarios have two fundamental problems: the availability of sufficient on-board electric energy and the source of this energy. Electric propulsion with energy stored in batteries and supercars, as well as with energy converted on board from hydrogen via fuel cells, is being developed in national and international programs.

However, when calculated in kilowatt hours per kilogram, the density of energy achievable with such systems is far less than that available via gasoline or diesel fuel, which strongly reduces the operational range of the vehicle. Furthermore, these systems are complex and obtaining a good level of reliability involves high costs and very large and/or heavy accumulators or conversion systems.

From another perspective, the problem of carbon dioxide emission is not solved by on-board storage of electric energy or hydrogen—it is simply displaced: worldwide, electric energy is produced primarily in coal-burning power plants, and hydrogen is produced almost solely from natural gas, heavy oil, and gasoline. Both cases result in carbon dioxide emissions at the place of production. For example, Norway sources 98.5 % of its electric energy from natural water forces, which is, of course, ideal; however, Norway has specific geographical conditions that are not necessarily available in other countries.

Development scenarios for automobile manufacturers worldwide are somewhat controversial: hybrid systems based on gasoline engines (because of market acceptance in the USA and Japan) have no advantage over advanced diesel engines; diesel is actually superior in vehicles driven on the motorway. Diesel and motor is possible, as two-stage turbocharging of the diesel seems more efficient; however, for short trips in city centers, the combination of diesel and a small motor is an interesting solution because of its emission-free nature.

Hydrogen in fuel cells, as well as hydrogen in piston and Winkle engines is a very interesting subject at this time, as is the use of alcohol, vegetable oils, and liquefied petroleum gas (LPG). This is not a sign of lack of concept or of doubt, but testimony that the propulsion system and its on-board management must adapt to the diversity of automobiles in the future.

Last century, transport was a primary criterion in the development of civilization. Transport systems required dynamic development of techniques, which activated a multitude of domains, from technology and economic structures through to politics.

Plants, biomass: The availability of plants or biomass, as recipients and transformers of solar energy has practically no limits. Use in piston engines is technically feasible—alcohols such as methanol and ethanol in gasoline engines, dimethyl ether, oils, oil-esters, and bio-fuels with diesel fuel structure. The yearly global biomass potential is, as an energy equivalent, times higher than the energy equivalent of the early extracted crude oil.

Water and wind play an insignificant role in the production of electrical energy and hydrogen worldwide. The use of nuclear energy is generally very controversial; any extension into transport would be strongly contested. The current potential of plants and biomass, and the increasing number of photovoltaic plants, for production of electric power or hydrogen are the true alternatives to fossil resources for the mobility sector.

The 5 Principles Of A Good Camera Stabilizer

What You Need To Know About The HCV Genotyping Kit

How This Extrusion Production Line Can Optimize Your Flooring Process

What Are The Considerations Of Finding School Furniture Manufacturers