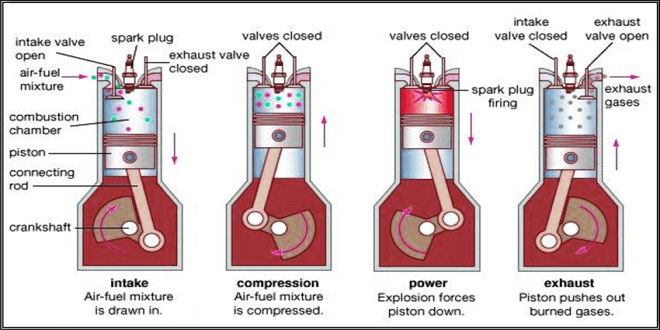 The control of combustion by self-ignition shows advantages with respect to thermal efficiency, NOx reduction, and process stability in both SI and CI engines. As the main stage of energy conversion in an engine, the combustion process and its control play a determining role in the chain of process sequences. New self ignition concepts are replacing the conventional forms of initiation and propagation of combustion in SI and CI engines.

Initiation of combustion in SI engines by external energy is succeeded by chain-like branching and propagation of the reaction within the fuel– air mixture, which is more or less homogeneous and isotropic. Each propagation from a single initiation center into a medium with homogeneous properties occurs as a diffusing front, and in combustion as a flame front.

The corresponding increase in internal energy, representing the kinetic energy of molecules, occasionally leads to the disruption of molecules resulting from combustion; thus, the main products can form dissociation radicals, which are the seeds for new molecules such as NO or NO2.

Increasing the distance between exothermic centers leads to a decrease in heat transfer intensity from one center to the next, because of the low temperature of the medium between centers. Therefore, an ideal support for the combustion process is obtained when the temperature of the medium between the centers is high enough to transport heat from one center to the next, but low enough to avoid dissociation. Obviously, the lower limit is given when using a fuel with additives. In other cases, media that can transfer the heat for reaction are dispersed homogeneously within the combustion chamber.

Combustion by self-ignition without diffusion and without propagation of the flame front is based on the same physical and chemical processes but at very different levels of pressure and temperature. Homogeneous charge compression ignition (HCCI) is a very popular method, but not very exact if applied to the CI process in diesel engines. The method consists of the distribution of exothermic centers within a mass of burned gas, and not in the generation of a homogeneous charge.

It is generally considered that only a third of the heat input into a piston engine is transformed into work, another third is ejected as burned gas, and the last third is lost as heat transfer through the cooling circuit. The improvement measures discussed in this section are related to the first third, the transformation of heat into work, and to the second third, utilization of exhaust gas in turbines. The loss of heat by cooling has been more or less neglected until now. Management between engine and cooling circuit has appeared recently in the opposite direction: water in the cooling system is occasionally heated by an external combustion system to warm the engine at start.

Furthermore, a considerable problem is actuation of the water pump by the engine itself, as a function of engine speed. Therefore, the volume flow of the coolant is strongly speed dependent; a load-dependent adjustment is very limited. A better alternative is actuation of the pump electrically, with speed control as a function of the momentary load–speed combination, for optimum operation between cooling effect and engine efficiency. Such applications are increasingly being introduced in series production of advanced four- and six-cylinder engines.

The 5 Principles Of A Good Camera Stabilizer

What You Need To Know About The HCV Genotyping Kit

How This Extrusion Production Line Can Optimize Your Flooring Process

What Are The Considerations Of Finding School Furniture Manufacturers